*If you click a link on this page and make a purchase, we may receive a small commission at no extra cost to you.Learn more

Playing darts 501 is pretty straightforward. In this article, I will help you understand everything you need to know as a beginner to be able to play darts 501 with your friends this night.

Also, there are some throwing tips for darts 501 that you will find at the second section of this guide.

Whenever a player hits the board at specific locations on the dart board, the points get deducted from the total.

The player who reaches zero at the earliest is declared the winner.

It is also called as a double out game.  A player gets three darts to throw in each turn.

There is no limit to the number of players. You can play an individual game or a team game.

For a team game, the net score will be the sum of points each player scores.

The total points in each round will be deducted from the team’s 501 initial scores.

The game starts when a player doubles in. It is when the points start getting deducted from the 501 scores. The player has to focus on the outer ring on the board.

The double spaces (on the thin-layer of outer ring) around the ring are the target points he has to hit.

Or he can also hit the bull’s eye to start off. The deduction of points from the score 501 is supposed to start from here. The points scored before doubling-in will not be considered.

Each player gets 9 darts to throw. He can throw 3 darts in each round, after which the chance goes to the opponent.

Each set in the game consists of three legs.

The number of sets can vary, depending on the match.

However, it will always be in odd numbers.

Score-Value: The score value for each section on board may vary. The sections are double-ring (twice the number), triple-ring (thrice the number), single-area (face-value), single-outer-bull (25-points), double-winner bull (50 points), and outside number ring (zero-points).

Zero-Score: There are three situations when the player gets zero points for a hit. The first situation is the dart hitting outside the board areas. The second situation is a bounce off from the board after hitting. The third situation is hitting a dart that is already on board.

Busting:  Busting is a situation when an individual player gets his score to 1 or below zero. The rule says no points will be awarded for a bust. The turn to play goes to the other player. When the player scores exactly zero, he will be declared as the winner. The rule applies not only for the winning points but also for every turn in the game.

Holding Position: The player has to hold the dart between the forefinger and the thumb. He must stand at a minimum distance of 7 feet and a maximum of 7 feet and 9 inches.

Board-Position: The board should be at a distance of 5’ + 8” from the floor. Preferably, the dart should be at the eye-level of the players. If the position varies for individual players, the referee can take the final decision on placing the dart-board.

The darts can have steel tips or soft tips. Some of the tournament authorities may also allow brass tips. The inside barrel should offer adequate balance while throwing. Each dart used by the players may be subject to inspection by the referee before the match starts. The player may use darts with lesser weight than the maximum value.

Darts 501 allows 6 types of flights for the player to throw. The first one is the standard path. It is direct and straight. The second one is the tear-drop shape. The third form is kite-flight. The fourth one is lantern-flight. The fifth one is six-shape. The sixth one is slim-flight.

The player can choose any of the patterns for throwing. But he cannot use the flight path which is out of scope in the darts-501 rues book. The referee will keep a constant watch on the flight paths and he will have the right to disqualify a player when he finds any faults.

We have introduced you to some of the basic, but most important rules of the Darts 501 game. Make sure you follow them completely to be on safe grounds while playing. It is essential that you follow the guidelines given by your coach during the training. Then you can avoid the mistakes and become a perfect player.

As you can see, it is pretty simple to play.

My Other Posts
I'm a financial analyst, ping pong lover and an enthusiast father. I'm 30. I have one little boy. Whenever I'm not stuck in numbers, you'll find me in my game room chilling.

Looking For A Reliable Table ? 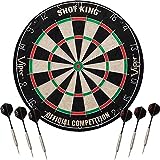