How to Play Darts 301: Beginners Guide

If you have every watched darts at a professional level or if you belong to a dart league, then you have heard of the 301.

The 01 series comprises dart games that are very simple in concept, which makes them pretty popular among competitive dart throwers.

Besides the apparent simplicity of the game, however, a lot of skill is needed to win at darts 301.

This article is going to explain everything you need to know about how to play darts 301 even if you’re a total beginners in darts.

Darts 301 is players with two players, or alternatively, the players can form teams of two.

The game begins with a score of 301 points for each player, and the goal is to be the first player to get to exactly zero.

Whenever a player makes a throw, they subtract the resultant sum from their total points, and the game goes on until one of the players or teams becomes the first to get to a score of zero.

In darts 301, all numbers are in play, but the most popular ones to aim for are 20 and 19 because they are high percentage shots that will score you high points and help get you out sooner. 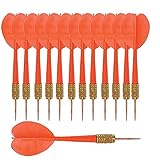 Strategies In Darts 301 For Beginners

It takes some good skill and calculated throws to be able to win a game of 301, and while skilled players can get away with shooting for the most points and finding the quickest possible out, beginners and intermediate players might need to employ a bit more strategy.

Beginners are advised to try getting to 32 points for their out which would call for a throw that strikes the double 16. This is a perfect strategy because in case you miss the double and strike a single 16, you now have 16 points left which calls for striking a double 8.

If you miss this again and hit a single 8, you now have 8 points left which calls for a double 4, and this could go on till you get to zero.

Another winning strategy is to throw your strongest number. The ideal dream is to be able to hit the triple 20, therefore, scoring the most points, but not many players can achieve this with ease.

Ultimately, even throwing all three darts in the single 15 area will give you a much better score than all the 1’s and 5’s you land on while aiming for the 20.

To decide who gets to go first, both players take turns to throw one dart aiming at the bull’s eye.

The player whose dart lands closest to the bull’s eye gets to throw first. Typically, this is also the player who gets to name the game.

The 301 in particular typically begins as double-in and ends as double-out. What do all these terms mean?

Straight-in: also called straight-start, is whereby the first player throws three darts in an attempt to get the highest score possible (the highest attainable score is 180, obtained by hitting three triple 20s).

Double-in: also called double-start, is whereby the first player has to hit any double (the thin outer ring of the dartboard) before they begin counting their score.

Any throw made before hitting a double does not get to count in their total points and if the player cannot score double, then their score will not ‘open’.

This only counts for the first round though, so in subsequent rounds, the player would not have to throw a double again.

Double-out: this is whereby to win the game, a player has to hit a double that makes their exact score zero, and they have to achieve this with their first scoring dart.

Straight-out: the player simply has to arrive at zero points. No doubles are necessary. Not however that the straight-out style is rarely ever used.

The person appointed to keep scores should show the score obtained in a throw as well as the resultant reduced total points. The thin outer ring is a double, the thin inner ring is a triple, the outer bull is 25 points, and the inner bull is 50 points.

In 301, it can get to a point where the player is said to have “busted”. When this happens, all darts thrown in that round do not count, and the player’s turn is over. Situations that count as a “bust” include:

Darts 301 is perfect for when you want fast practice, and this is the format most popularly used by people who are starting on a dart game career.

Keep in mind however that it takes some time and skill to master the mechanics involved in the game as well as the “out strategies” that can be used. 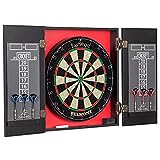