Oh okay… I know you’re probably about to play a game of air hockey like now so I will make it short.

The following air hockey rules are all you need to worry about.

These rules are the basic rules that are necessary to play an organized air hockey game. However, there some official rules I didn’t include here because they are irrelevant for most basic purposes of an amateur player.

Those were some of the basic air hockey rules that will make your matches more competitive and serious. However, keep in mind that you can change whatever rule you want or even add new rules. It’s your home, so your rules. But, be careful not to ruin the whole game.

For example, you can change the number of points each game is supposed to have. You can go for 5 or 3 if your time is tight or you can go for a higher number like 11 or even 21 if you wanna make the match longer. So, as you can see it all depends on what you want. 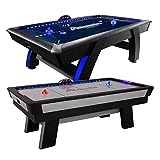 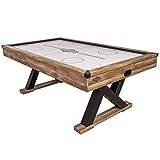 Air Hockey Is On Its Way To Become A Sport

Nowadays, air hockey is more than just an indoor game. It’s kind of a sport actually. Or at least there are many associations trying to make it a mainstream sport. For example, there’s The US Table Hockey Association.

These associations have made a lot of effort to regulate air hockey all over the globe. They organize tournaments and produce regulations about the rules of air hockey.

But, there’s a small problem for air hockey amateurs like you and me. These rules are often too long and very sophisticated. Nobody got time for dozens of annoying pages, right ?

The reason we find them annoying is because they weren’t made for people like us. These rules were intentionally created for professionals.

If you wanna play like professionals do in international tournaments, then you will need to read all the official rules that you can find on the USHTA website.

Bottom line, remember that the ultimate goal of this game is to have fun. So, make sure that everybody walks out happy from your game room. That’s what a game room is for: having a happy time with friends and family. 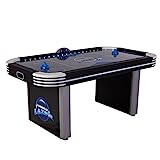