How To Play Cornhole: Complete Guide For Beginners

Playing cornhole is a perfect excuse for day-drinking, but even when it’s all fun and games, a match can get quite competitive because who likes losing anyway?

This guide here was made for beginners that are looking to learn how to play cornhole and want just to know the basic rules of cornhole as well as some tips on how to play this game.

Whether you are looking to participate in an upcoming cornhole tournament of if you simply want to show off your throwing skills at a barbeque party, this article will provide some valuable information ranging from rules and regulation, down to valuable throwing tips you can use during your next match in cornhole.

As illustrated below, always adhere to the proper court layout when setting up the platforms. This involves paying attention to: A north-south court setting is recommended so that you can reduce the effects of the sun when playing in an outdoor court.

When playing in an indoor court, make sure there is a minimum 12ft vertical clearance to the lowest obstruction.

When a foul occurs in cornhole, the play is stopped so that the tossed bag can be removed from the court before play resumes. Actions that are considered fouls include:

To ensure fair and accurate play for all contestants, always keep the court in perfect playing condition by ensuring it is free of any debris, distractions, and obstructions.

Note however that during a match, no contestant is allowed to alter the court in any manner whatsoever unless they obtain the consent of all other players.

There are many Cornhole boards in the market but a standard ACA sanctioned board ought to measure 48” x 24”, be made out of plywood and be at least ½” thick.

As illustrated below, there are also strict regulations concerning the location of the hole on the Cornhole board as well as how tall the platform should be, once it has been set up for play. The deck face of the platform should have a smooth texture and be free of any blemishes that might distort play. Additionally, it is recommended that the surface paint be an easy-to-see color such as white.

Cornhole bags should measure 6” x 6”, weighing anywhere between 14-16 ounces and be made from duck canvas in an easy-to-see color. The filling could be feed corn or plastic resin pellets, but the latter is preferred for all-weather play.

First off, every contestant must remain in the designated pitcher’s box while pitching a bag.

There are separate distances for open adult play and junior play, and these are stipulated by the 27ft and 21ft foul lines respectively.

For senior adults or impaired players, however, they could be allowed to observe the 21ft foul line as long as it has been agreed upon by all contestants.

How To Play Cornhole: Step by Step Guide

You can play Cornhole either as doubles or as singles. Singles play is whereby a contestant gets to compete against another contestant.

Doubles play on the other hand involves having two contestants on one team and another two on the opposing team.

Step 2: Place four beanbags of one color on one board, and place another four bags of another color on the board that’s on the opposite side.

Step 3: The players get to decide who goes first and this can be done via a coin toss or any other process.

Step 4: Standing in the pitcher’s box, the player selected to go first will toss one of their four bean bags aiming to pass it through the hole on the opposite board.

Step 5: The opposing player gets to reciprocate by tossing one of their four bags at the board opposite them.

Step 6: The players keep playing while taking turns and this goes on until all eight bags have been tossed, which then marks the end of a round.

Step 7: Scores are tallied, and the player with the most points tosses first in the next round.

Step 2: Place all eight bean bags on one board.

Step 3: Decide which team gets to toss first.

Step 4: Players 1 from both Team A and Team B stand on the pitcher’s boxes on either side on the platform where the 8 Cornhole bags have been placed. Likewise, players 2 from either team stand in their respective pitcher’s box at the board on the opposite side.

Step 5: The two players standing at the headboard (players 1) take alternating turns tossing one bag at a go until all eight bags have been tossed (each player throws four bags).

The big difference between doubles play and singles play is that in doubles play, one team could knock another team’s bags off the board.

Step 6: After tossing all eight bags, a round is deemed complete, and the scores are then tallied.

Step 7: The players at the footboard (players 2) now get to toss the bags back to the other Cornhole platform (headboard), alternating turns in the process.

Step 8: After tossing all eight bags, scores for round 2 are tallied once again and added to the points obtained in the first round.

Woody: a bean bag that lands on the Cornhole board. It is also called a Boarder.

Cornhole: a bean bag that passes through the Cornhole board hole. It is also called a Holer or Corn in the Hole.

Foul bags: a bean bag that’s neither a woody nor a Cornhole, as a result of some rules violation. Foul bags include:

4. Length of a Game in Cornhole

Teams and contestants keep playing Cornhole rounds until one team/contestant becomes the first to reach or exceed 21 points.

Using cancellation scoring, points earned in each round are added up as players play more rounds and this goes on until the first player reaches 21 points.

Cornhole relies on cancellation scoring whereby one player’s points cancel out the opponent’s points. This way, only one player scores in each frame.

Before making your pitch, take time to find a comfortable stance which feels natural and relaxed. Whether you choose to step forward or stand still while tossing, different positions and postures work for different people, so there is no particular formula to figuring this out, other than making sure your throw is fluid.

Learn to spin the bean bag while throwing it. This will stabilize the bag, therefore, allowing for a more accurate toss.

While tossing, try to make sure the bag arcs 5-10ft above the ground. This lessens the impact once the bag lands on the platform and ensures it sticks in place rather than sliding off.

This lawn game involves a lot of strategies and lucky for you; it is deemed acceptable to ask for advice from teammates or spectators, on where to throw your next pitch.

There are four essential shooting techniques you should try to employ:

Dos Cornhole: when you throw two bags in the hole.

Holy Moly Triple Cornholy: when you throw three bags in the hole.

Corn on the Cob: when all your bags end up on the board.

The Great Cornholio: a person that manages to throw all four bags in the hole.

Nothin’ but Corn: when a bag goes right through the hole without touching the board.

Get that Corn Outta my Face!: an expression used when you manage to successfully counteract an opponent’s attempts to score. For instance, after knocking their bag off the board or when you throw a cornhole immediately after they put a bag in the hole.

Whether you are playing Cornhole competitively in a tournament or recreationally while sipping beers in your backyard, it never hurts to learn a few new tricks to better your game.

Who knows, you just might end up winning a couple of bets in the process and who doesn’t like that?

Let me know in the comments section below if you have any questions about how to play cornhole. 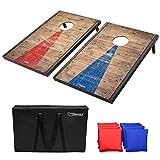