Ladder golf is a game between 2-4 players, depending.

It can also be played by teams, depending on the circumstances.

Three goalball bolas are given to each participant and they are required to wrap them the 3 ladder rungs (the bottom, middle and top).

In this case, a bola refers to standard golf balls that have been attached by a special nylon rope.

You can choose to purchase a ready ladder ball set or build one. But we are going to take you through the construction procedure.

And for that, we highly recommend you use a PVS ¾” if you decide to construct as it offers durability.

The vertical 3 pieces should be about 12” and the spacing between each, after arranging around 13”.

The game can be played using one or two ladders. 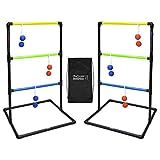 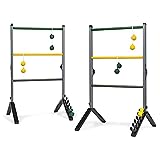 But we are going to look at what you need to construct two ladders;

Once you have all this in place, the next step is cutting the PVC pipe. And for each of the two ladders, you will require;

So basically for one ladder, your checklist includes:

Next is the building step and this should be fun especially if you love trying out new things.

First, carefully arrange all the pieces to form a ladder assembly.

You can decide to use glue to stick them together or leave them without.

If you desire a ladder that you can disassemble for easy storage after the game, then there is no need for gluing the pieces.

Besides, the ladder is strong enough even without glued joints.

Bonus Point; if you want a colorful ladder, then you should take time to color the pipes to give them an attractive appearance.

Choose 2-3 colors of your choice and get playful. Let the paint completely dry before assembling.

As earlier on mentioned. The bola is made of 2 standard goal balls, complete with a string on each end. For this you will need;

Note; Take time to learn how to properly operate the power machines before trying anything. If you have never used them before, we advise you to enroll in some classes.

First, drill a perfect hole through the goal balls. The easiest way to do this is by first drilling around a 1” diameter hole on a piece of wood.

Clamp it on your working table for ease of work.

Once done, fix your golf ball into the hole, such that it sits perfectly.

Now drill through it. Repeat the same process with the remaining balls. Then pull the rope through the goal balls’ holes and tie a knot on each end.

First, identify a space and set your ladder.

Then, stand next to the ladder and take 5 normal strides moving forward. Use a marker to draw a line at the end of the 5th stride.

The official term for this line is the “toss line”.

Alternatively, you can use a tape measure and draw the toss line at a distance of 15-feet (the official measurements) from the ladder.

But since sometimes the game involves children, strides work perfectly as they reduce the distance between the toss line and the ladder for easy throwing. Also, most players prefer using paces.

The Ladder golf sport is played in rounds that allow all the players to toss 3 bolas.

You can use a coin to decide which team starts first and kick-start the game.

The player that comes first, tosses all their three bolas before the next player and the pattern continues until all players have played.

The player who wins the 1st round is then allowed to toss 1st in the next round.

The game continues until a maximum of exactly 21 points is achieved after completing the round. The winner is the only player that achieves the 21 points after a toss.

If a player scores more than 21 points, then their points for that round are disqualified and do not count. So for instance, a player with 15 points, only requires exactly 6 points in the next tossing to be declared the winner.

If they fail to hit the mark or exceed the required 6 points, then they will participate in the next round with 15 points, again.

The top step has three points, the middle two and the bottom one point.

How far apart are the ladders in Ladder Golf?

The official space between the ladders is 15-feet.

Do points cancel in Ladder Golf?

The official ladder goal dimensions include a 15-feet distance between the ladder and the toss line/ the other ladder.

But if the game is just for fun, then players use 5 paces as a guideline. The sport requires the use of bolas, which are made out of golf balls.

Players in this game score by wrapping the 3 bolas around the ladder steps by tossing them. The first player to gain 21points is declared the winner.